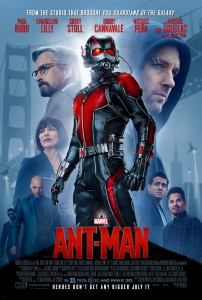 Didn’t see this one coming but it turns out that Ant Man is a better film than the Avengers: Age of Ultron.

One of the reasons is that the comedy factor so complained about in marvel movies actually works in this film, as do the references by Hank Pym to his past as the Ant man.

The overall direction by Peyton Reed was well executed and we could see him helm a few more marvel movies if he keeps this up.

This was a film that we did not want to end.

The action scenes as per marvel studios standard are all well done and the story kept us hooked for the entire time.

Michael Douglas does a fantastic job as Hank Pym as does Paul Rudd, all of the actors in fact were spot on, we can see this easily turning into a credible franchise.

Not knowing much about this movie was another plus point which got us all on board.

Please go along and see this movie and just enjoy it, we had a great time. ****½